Clarence Eugene “Hank” Snow was born on May 9th, 1914 in the sleepy fishing village of Brooklyn, Queens County, on Nova Scotia’s beautiful South Shore, just down the tracks from Liverpool.

As a boy, Hank faced many difficulties and shortcomings. He had to face the trauma of his parents’ divorce at just eight years old and he was forced to stay with his grandparents. He then had to deal with an abusive grandmother who forbid him to see his mother. He regularly sneaked out at night and walked the railroad tracks to Liverpool where his mother was living. Not willing to return to his grandmother, who would often beat him for visiting his mom, he would sometimes seek shelter in Liverpool’s railway station, now home of the Hank Snow Country Music Centre.

Both his parents had musical talent and Hank picked up his basic guitar-playing skills from his mother. In 1926, Hank went to sea as a 12-year-old cabin boy on fishing schooners based out of Lunenburg to

escape his abusive step-father and never returned to school. With his first earned income he bought his first guitar, a T. Eaton Special for $5.95. While at sea, Hank would listen to Jimmie Rodgers on the radio and began to imitate him and entertain the crew. It wasn’t long before Hank had picked up his own style.

He entertained friends and neighbors and quickly developed excellent skills as a musician and entertainer at kitchen parties and neighborhood picnics.

His professional career started at CHNS Radio in Halifax in 1933 where he had his own radio show. He changed his name to “Hank, The Yodeling Ranger” because it sounded more western. Throughout the 30s and 40s he toured the Maritimes and Western Canada playing at county fairs and local radio stations.

On September 2nd 1935 Hank Snow married Minnie Blanche Aalders, who stayed with Hank through all the hard, traveling years and beyond. Hank and Minnie had one son together, Jimmie Rodgers Snow (named after Hank’s idol Jimmie Rodgers), who also traveled with them and eventually joined Hank on stage on numerous occasions.

In 1936 he made his first recording in Montreal with RCA Victor’s Bluebird label and signed a contract that would last 47 years, the longest continuous contract in the history of the recording industry.

The man known as “Hank, The Singing Ranger”‚ made his way down South and had his first appearance at WWVA Jamboree in 1945. Here he acquired his trained horse Shawnee, whose tricks and daredevil stunts with Hank endeared them to audiences.

Ernest Tubb invited Hank to the Grand Ole Opry on January 7, 1950. He performed at the Opry for 46 years. His first few appearances received only luke-warm appreciation, until he wrote and recorded the song “I’m Movin’ On”, which became the top country song of 1950 and still holds the country music record for number of consecutive weeks at the number one chart position. This enabled him to finally buy the family’s first home, the Rainbow Ranch, where Min still lives today, just outside of Nashville.

In 1954 another top country song of the year followed, Hank’s “I Don’t Hurt Any More”.

In the early fifties Hank discovered a young singer, in his mind a country singer, who just emphasized the beat a little more. The young talent’s name was Elvis Presley, and Hank took him on as an opening act, and later invited him to the Grand Ole Opry and introduced him to Colonel Parker who eventually became Elvis’ Manager.

Throughout his life he recorded over 100 LPs, including everything from hit parade material to gospel, train songs, instrumentals (alone and with Chet Atkins), tributes to Jimmie Rodgers and the Sons of the Pioneers, and recitations of Robert Service poems. He has always kept a warm spot in his heart for Nova Scotia, and he paid homage with his album “My Nova Scotia Home”. He also recorded “Squid Jiggin’ Ground” in honor of the fishermen he sailed with out of Lunenburg in his early youth.

His recordings were released in England, Germany, Australia, New Zealand, Japan and elsewhere.

He entertained troops during the Korean and Vietnam wars as well as in Germany and Norway.

Because he never forgot his troubled childhood he established the Hank Snow Foundation for abused children. He supported many foster children from around the world. He also dedicated a wonderful children’s playground on the site of his parent’s former home in Brooklyn, Nova Scotia in which Bowater Mersey Paper Company constructed.

At one time Hank operated a music school in Nashville, a publishing house in New York and owned two radio stations.

When he was sixty-one, he had the hit song “Hello Love” and thus holds the record of being the oldest country performer ever to have a number one hit. 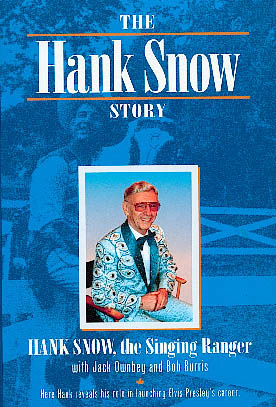 Prime Minister Trudeau and President Carter, as well as a number of state Governors and Premier Buchanan (NS) honoured Mr. Snow at various times. In May 1994 he received an Honourary Doctorate of Letters Degree from St. Mary’s University, Halifax, Nova Scotia.

Hank’s widow, Minnie Snow, passes away May 12 of Pneumonia at age 89.

His biography, “The Hank Snow Story“, is a personal record of the difficulties of his early years, his rise to success and his participation in a number of remarkable events.

(Available in our on-line catalogue.)

To read more about Hank’s passing click on the following links: